Gabriel’s time to carry on 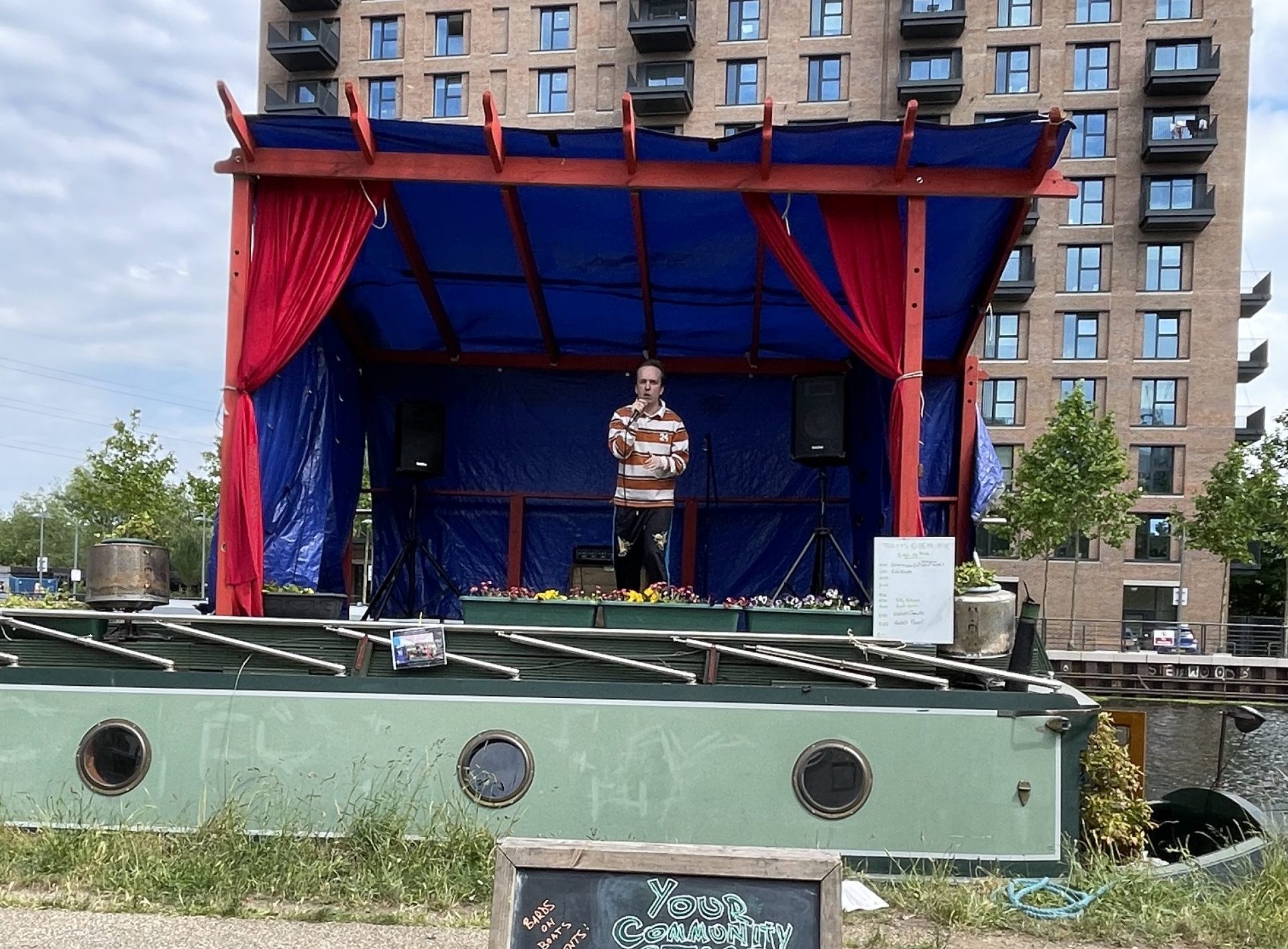 22-year old Gabriel Rogers Mullen isn’t your stereotypical rapper. He doesn’t wear any bling. He projects very little attitude. And he’s white. Borderline ginger, is more like it. Which, given his chosen art form, must frequently land him in provocative situations. Ones that he just as likely resolves by delivering one of his signature songs, a rap about the genre’s history, telling anyone who cares how:

Hip-hop was born in the Bronx.
It moved to Cali’ with beaches and bleached blondes.
And then it was London’s time to carry on

London, the global centre of rap?

London may or may not be the centre of rap’s galaxy, but it’s where Gabriel — performing as “Solar Flight” — carries on, writing material that emphasises clean lyrics and sunny positivity. He’s generously donned a laboratory coat for the Royal Society of Chemistry to record a 30-second ad offering to train teachers to rap, suggesting it’s a way to secondary school students to look at them through a more dynamic lens. This ad is part of our series focused on spoke word for climate change.

The only thing Gabriel loves as much as rapping is getting others to do it. I watched him last Spring on a chilly night performing on Molly Anna, front and centre on your canal boat where he engaged a passing group of three. Which of them were rappers? Two of them wheeled on their friend, Rudy. Fingers pointing at him, he grudgingly admitted harbouring fantasies of performing beyond his small room, for an audience larger than his crew. Between his friends’ encouragement and Gabriel’s coaxing, he soon had some lines. An hour later he was at the mic, Gabriel backing him with rhythm and a physical presence. He knows it’s lonely up there.

Music connects people. But it also divides us. As much as Gabriel and Rudy created a moment that lives online forever, that same music feels inaccessible to me. Drill? Trap? Grime? I’m perplexed by the newer branches of rap’s musical tree.

That’s no accident, suggests Martin Anderson, spoken word artist and long-time surveyor of the poetry scene. “Their purpose is to exclude us.”

It’s music with origins in “postcode” wars, he says. Tracks that describe a Road Man’s life. Selling drugs in rural parts of the country. Making “County lines” news ledes. Whether it ever gets on air, or is limited to shares on Telegraph, or another app the police shouldn’t know about, it’s a way to validate a lifestyle. And since criminal life mesmerises us, it’s a short step to pop culture. World-wide. Just look at the narco-corridos of Mexico.

“Think of it as folk art,” Martin suggests. A poor person’s DIY approach to music where all you need is your voice and a phone.

The ubiquity of rap, the way kids in playgrounds construct their own, suggests great educational utility, and a role for people with Gabriel’s talent.

Rap — which has captured the zeitgeist of spoken word, which is really just poetry and story-telling, and old as campfires — fulfils a human need…. to communicate. And because of who favours it, it has a unique capacity to rectify historic under-representation of minorities in natural science.

Inclusivity. The natural sciences get a failing grade…

For climate scientists like Richard Pancost at the University of Bristol, this is a big deal. Between flood victims in Pakistan, and Hackney residents dealing with the urban heat island, climate change hits the poor the hardest. Something that Pancost addressed when he wrote “those marginalised groups must be part of the movement. They must set the agenda. They must lead the movement.” That’s where the  London-based rapper, Gabriel Rogers Mullen comes in; he’s working with a select group of spoken word poets to create scientifically informed performances on climate change with Your Canal Boat.

What we’re doing about it…

Martin Sanderson looks back at his life, and his dawning consciousness of racial inequality that he traces to Rock Against Racism, 45 years ago. “It absolutely raised awareness of racism,” he says. “You couldn’t ignore it any longer. It became completely uncool.”

“That’s what I want to see us do. To make turning a blind eye to the climate crisis uncool.”

It’s a lofty goal, but one we’re working towards with workshops that convene scientists and poets, fortnightly in October and November, leading up to an end of year climate change slam poetry competition. All events are on the Molly Anna, whose precise location on the Regents Canal you’ll be informed of here.